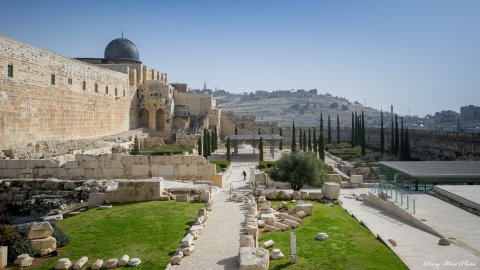 Jerusalem’s rich religious history and its well preserved archaeological record provided a poignant backdrop to GAFCON 2018. The final conference picture of almost 2000 delegates from around the globe gathered as one body on the Temple Steps in the Old City is a beautiful pictorial summary of the gathering (See photo on page 2). It is also a reminder of the meeting’s location: Jerusalem. The city figures large in seemingly everything, which prompted this columnist to do a bit of Biblical story checking.

The place name Jerusalem appears 660 times in the Old Testament, with more than half of those occurrences in the Historical Books (in the Protestant Canon consisting of: Joshua, Judges, Ruth, 1 and 2 Samuel, 1 and 2 Kings, 1 and 2 Chronicles, Ezra, Nehemiah, and Esther). Notably, the city is not mentioned as such in the Pentateuch (Genesis, Exodus, Leviticus, Numbers, and Deuteronomy)1. The first specific Biblical reference to Jerusalem is in Joshua 10:3 where King Adonizedek organizes a coalition of five Amorite kings to attack Gibeon. Joshua reportedly defeats the alliance and safeguards Gibeon. Despite their defeat on the battlefield, the city remains a minor Canaanite stronghold of the Jebusites until the military activities of David.

David and all Israel marched to Jerusalem, that is Jebus, where the Jebusites were, the inhabitants of the land. The inhabitants of Jebus said to David, “You will not come in here.” Nevertheless David took the stronghold of Zion, now the city of David. 1 Chr 11:4-5 (ESV)

Following David’s capture of the city, Jerusalem becomes the capital of the nascent Israelite state and later the location of Solomon’s building activities, most importantly the Temple.

The story arch of Jerusalem’s capture tells of a location with a pre-history. Rather than planting a stake in the ground and raising a city from nothing, God directs his people to an already established settlement. Jebus is a Canaanite stronghold, inhabited by enemies of Israel who are worshipping other gods, an assertion underscored in the very designation of the city. Benjamin Davidson suggests the name of Jebus is derived from a verb root, סוב , which can come to mean either “to trample upon, tread under foot,” or “to be high, with the implication of religious worship, true or false, including the high places of Baal worship.”2 In the current context, both definitions may be apt characterizations of the town’s activities. Certainly, the town’s pre-Israelite name allows for an association of its inhabitants with illicit religious practices, which, by the way, are to be avoided at all cost by Israel. How telling, then, that God would choose a location with a questionable prehistory as the center of Israel’s national governance and worship. With God, nothing is beyond redemption.

As Israel’s history traverses throughout the OT from united monarchy, to the divided monarchy, exile, and, finally, to the return from exile, literary perceptions and presentations of the city change. The Psalms view Jerusalem as the seat of God’s rule3. The Deuteronomistic Histories tend to view Jerusalem as a special city, but one that will fall unless its inhabitants are faithful to the will of God; the temple gives the location its significance, but it is no guarantor.

In the book of Isaiah, the city receives a multitude of treatments. Early Isaiah asserts God as founder of Jerusalem for the purposes of providing justice for the poor, risking punishment if injustice is tolerated. Later, Isaiah utilizes a “figured” Jerusalem in the role of prophet proclaiming good news to her exiles. Finally, late Isaiah presents a literary portrait of a new, glorious city located in the future.

The New Testament mentions Jerusalem more than 140 times. In the early life of Jesus, the city is a destination for his parents when presenting the infant (Lk 2:22), and when making the yearly journey for Passover (Lk 2:41-45). In the life and ministry of Jesus, Jerusalem is the place of his crucifixion, burial, and resurrection, as anticipated in Mark 10: 32-34:

They were on their way up to Jerusalem, with Jesus leading the way, and the disciples were astonished, while those who followed were afraid. Again he took the Twelve aside and told them what was going to happen to him. “We are going up to Jerusalem,” he said, “and the Son of Man will be delivered over to the chief priests and the teachers of the law. They will condemn him to death and will hand him over to the Gentiles, who will mock him and spit on him, flog him and kill him. Three days later he will rise.”

Jerusalem, described by Jesus as “killing the prophets and stoning those who are sent to you” (Mt 23:37), is also the location of the outpouring of the Holy Spirit, “Do not leave Jerusalem, but wait for the gift my Father promised, which you have heard me speak about. For John baptized with water, but in a few days you will be baptized with the Holy Spirit” (Acts 1:4-5), and the proclamation of the resurrection of Jesus on the day of Pentecost (Acts 2:14-38). Following the inception of the Christian church, Jerusalem is the venue for one, possibly two important church councils, concerned with the question of admission of Gentiles into the church (Acts 11) and of the requirements laid upon Gentile converts (Acts 15). With the destruction of Jerusalem in 70 AD, the leadership of the Jerusalem church begins to decline and is eventually eclipsed by Gentile Christianity. Yet, Jerusalem continues to figure into the Christian hope as a new creation, a new Jerusalem:

The one who is victorious I will make a pillar in the temple of my God. Never again will they leave it. I will write on them the name of my God and the name of the city of my God, the new Jerusalem, which is coming down out of heaven from my God; and I will also write on them my new name. Revelation 3:12

I saw the Holy City, the new Jerusalem, coming down out of heaven from God, prepared as a bride beautifully dressed for her husband. Revelation 21:2

And he carried me away in the Spirit to a mountain great and high, and showed me the Holy City, Jerusalem, coming down out of heaven from God. Revelation 21:10

In the words of one Rabbi, “Jerusalem is not special to us because it has some sort of mystical attributes in its ground or supernatural force beneath its rocks—our history is what sanctified this city, and our hope for the future is why we remain loyal to it […] A holy place is about remembering its past—but only in order to sanctify the future.”

1 Genesis 14:18 identifies Melchizedek as the king of Salem, probably an abbreviated reference to Jerusalem (see Psalm 76:2).