The Anglican Diocese of Pittsburgh announces Archbishop Foley Beach has appointed The Rt. Rev. Martyn Minns as our new Interim Bishop following the resignation of Bishop Hobby. Archbishop Beach made the announcement during a video address to the 155th Diocesan Convention on Saturday, November 7. Interim Bishop Minns also made a video introduction to the convention deputies at that time.

The Standing Committee remains the Ecclesiastical Authority of the Diocese, and Interim Bishop Minns' will be supporting the Diocese by confirming, ordaining and providing clergy care.

About his ministry in Pittsburgh, The Right Reverend Martyn Minns writes, “Angela, Rachel and I are looking forward to walking alongside the ordained women and men of this wonderful diocese and giving encouragement to the many congregations that make up this gifted and diverse community. These are challenging times, but we serve a God who cannot be overwhelmed and has promised that nothing, absolutely nothing, can prevail against His church. To God be the Glory.” 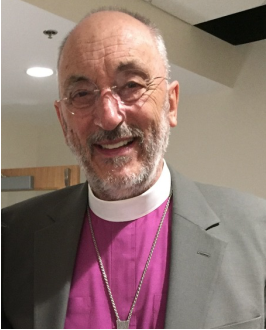 Martyn Minns (born April 16, 1943) is an English-born American bishop who is passionate about making disciples of Jesus Christ.

He was consecrated a bishop on August 20, 2006 by the Church of Nigeria (Anglican Communion) and appointed to serve as the founding missionary bishop of the Convocation of Anglicans in North America [CANA] – until his retirement in January 2014. CANA was one of the founding entities within the Anglican Church in North America [ACNA]. He also served as Executive Director of the Global Fellowship of Confessing Anglicans [GAFCON] from September 2011 through June 2014. Before becoming a bishop, he served as rector of Truro Church in Fairfax, Virginia.

He and his wife, the former Angela Rose Carlisle, are the proud parents of five children and have twelve grandchildren and three great-grandchildren. They now make their home in Destin, Florida.

Bishop Minns is unashamed of the radical claims of the Gospel of Christ and believes that it is good news of great joy for all people.