Reflections on the ACNA Provincial Assembly 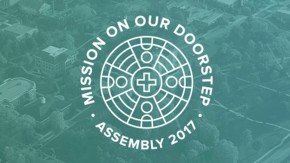 The ACNA is like a cartoon mouse with large, oversize feet, described The Rt. Rev. Dr. Bill Atwood, Dean of the ACNA for International Affairs and Bishop of The International Diocese. Speaking to the Provincial Assembly this past June, Atwood meant through the reference we are small in size but have an enormously large footprint in Anglicanism world-wide. Who else in the Anglican world can gather more than 30 global archbishops, some 50 bishops, hundreds of clergy, and many more lay delegates, exhibitors, missionaries, chaplains, students, youth workers and ministry heads – 1,400 in all to Wheaton College in suburban Chicago?

Anglican pundit David Virtue said this Assembly was described as the largest single gathering of global Anglican leaders ever convened in the Western Hemisphere. The Assembly theme was summed up in the title, “Mission on Our Doorstep – Global Family, Local Mission, Shared Gospel.”

The official delegation from the Diocese of Pittsburgh included about 75 saints:

A major highlight of the Provincial Council Meeting was the admission of the Diocese of South Carolina as the newest and thirty-first diocese of the ACNA.  Former Pittsburgh rector and current South Carolina diocesan bishop, Mark Lawrence, quoting poet Robert Frost, said: “Home is that place that when you come to it, they have to let you in…well, you didn't have to let us in, but you have, and it feels today like a homecoming for the Diocese of South Carolina and for me, the bishop,” continued Bishop Lawrence. "This is a new chapter we take up today along with you."

A high point of the closing service was the consecration of Canon Andy Lines as an ACNA missionary bishop in the Anglican Diocese of the South for work in the British Isles.  In commissioning Bishop Lines, the Primate of all Nigeria Archbishop Nicholas Okoh charged him to, “Take heed to the flock over which God has given you. Beware of false teaching. In most cases, heresies and false teaching is not necessarily obvious. Falsehood is a mixture of truth and falsehood. This creature is partly animal and partly human. Flee from such teaching.”

Archbishop Okoh went on to state to Bishop Lines and the whole Assembly, “Keep your head in all situations. Do the work of an evangelist. People of God, it is never true to water down the gospel message. In fact, I am convinced that the opposite is true. When we concentrate on delivering the gospel of Jesus Christ, people will be cut to the heart and repent. Christianity without repentance is not true Christianity. We must refute erroneous doctrines, contend for the faith of the Church. We are to place teaching above ceremonies which is gaining the ascendency.”

Lay delegate Cindy Thomas said one take away from this Assembly were the powerful worship services and worship times each evening. Memorable for her were the words of Nigerian Archbishop, Ben Kwashi, “God didn’t save you to sit in a pew.” For Lay delegate David Edelstein, it was healing workshops and the ministry he received as well as the worship times. Lay delegate Jenni Bartling was moved by the absolutely compelling address given by Baroness Caroline Cox.  Her presentation titled Persecuted Heroes and Heroines in The World with her stunning photographs of men, women and children mainly in Africa and Asia moved many to tears. In describing these brave people Baroness Cox ended with another quote from Ben Kwashi about the persecuted church, “If you have a faith worth living for, it is a faith worth dying for. Don’t YOU compromise the faith that WE are living and dying for”

Not surprisingly, Jenni Bartling was thrilled with the amount of attention still focused on the ministry of church planting in our province. "Keynote speakers like Ed Stetzer, Dave Ferguson, and an entire Always Forward teaching track are clear indicators its priority has not waned," she noted.

As for me, I was so heartened by the vast number of young men and women from all over North America who attended the Assembly – far more than any of the previous ACNA gatherings I have attended.  And the number of young clergy church planters was truly impressive by any measure.  It bodes so well for the future of this great worldwide Anglican movement.

Archbishop Foley Beach also announced that the next Provincial Council Meeting will be held in Jerusalem concurrent with the GAFCON Conference next June.