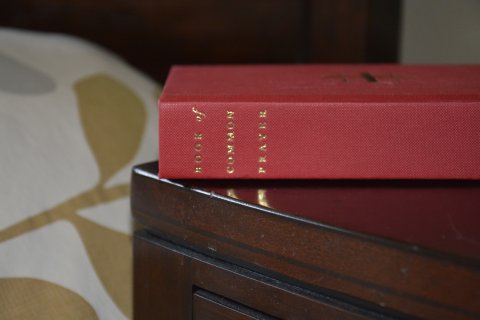 This article is cross-posted from the Fall 2019 issue of Trinity Magazine.

There are many of us in Diocesan or clergy circles who have been following the developments of the Book of Common Prayer 2019 and already know it like the back of our hands! However, we recognize not everyone might be as up to speed, so our Canon for Prayer & Worship, The Rev. Cn. Joanne Martin, has answered some common questions.

1. I recently joined an Anglican church for the first time. Why do we have a Book of Common Prayer? Why not just use the Bible?

The original Book of Common Prayer was developed in a time when most people could not read and most worship services were conducted in Latin. Thomas Cranmer wanted to develop a resource that allowed the congregation to learn the prayers so they could understand the worship services and pray with the clergy, rather than being passive observers. “Common” in this sense means “together,” rather than “ordinary,” the way we use the word today. The most startling innovation of the first BCP was that it was written in English, not Latin.

We continue to use a BCP alongside the Bible to enable us to worship “together.” The written prayers in the BCP are based on Scripture, often directly quoting verses. The calendar of Bible readings (called the “lectionary”) allows all churches around the world to read and meditate on the same passages on the same day. This increases the unity of the church. From week to week, we are praying together the same passages and same prayers, whether we are in the United States or another part of the world.

In 2009, several different episcopal groups came together to form the Anglican Church in North America. Most of these groups consisted of members who had left The Episcopal Church (TEC) at some point in the previous century over theological differences. Because they left at different times and maintained different customs, many of these groups were using different versions of the prayer book. It was agreed that, in order to increase the unity of the newly formed province, a version that was faithful to the theology of the BCP 1662 version would be used, but with modern language. A Liturgy Task Force has been working on this project for the last decade, producing the version that has been published this year.

3. What parts would I use if I am not a clergy?

Family Prayer is a great resource to help families have time together in prayer and Bible reading. It is a great place to start. The lectionary that starts on p. 734 provides a plan for reading through the Bible in a year. It can be used by itself, or with Morning and Evening Prayer. All of these tools can help you develop a pattern of spending time in prayer and Scripture reading.

If you want to “branch out” and explore other parts of the BCP, the “Collects of the Christian Year” (p. 598) and the “Occasional Prayers” (p. 642) are prayers that can be used at any time. There are also prayers that can be prayed when we are ill (pp. 225-231). Personally, these prayers are my favorite part of the prayer book. Cranmer had a gift for words, and sometimes they help me when I cannot find words of my own for concerns on my heart. I have prayed these prayers enough that several of them have become part of me, coming spontaneously to mind when I need them.

4. How does this relate to what we do on Sundays?

The pattern for the Sunday service comes from the Prayer Book, as do the readings. You can ask your priest which version you use (p. 103 or 123). If you are new to the liturgy, reading through it can be a helpful way to prepare yourself for worship.

5. Is there an electronic version?

Yes. The entire prayer book is available online at the Anglican Church in North America website. Apps for mobile use are being developed and should be available soon.

Other posts in this series: