#MarriageMonday: Priests bringing up sex with couples...thumbs up? thumbs down? 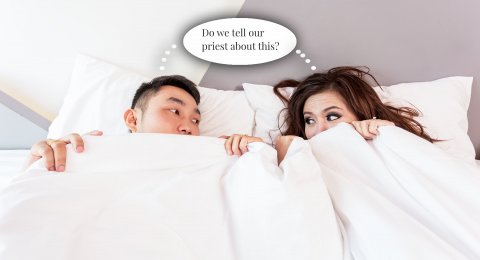 One of the most important and challenging roles for clergy is the preparation of couples for Christian marriage. In addition, one of the most challenging aspects of Christian marriage preparation is what to do with couples who are sexually active before they get married.  In a culture that encourages sexual freedom and promiscuity, rare is the couple that shows up in a priest’s office sexually pure and excited to wait until their wedding day to have sexual intercourse for the first time.  A majority of pre-married couples are sexually active, both in and outside of the Church.  Many see no problem with it. So, the Church’s dilemma: Do we address sex with engaged couples and if so, how?  Or, do we take the easy way out, ignore or gloss over the tough subject of sex, and focus our preparation on the easier but also important subjects like; communication and conflict, finances, roles and responsibilities, and dealing with in-laws?

I struggled so much with this subject in my pastoral work with pre-married couples that I devoted by Doctor of Ministry thesis to it! (My thesis title: Addressing Cohabitation and Pre-marital Sex in Church Marriage Preparation) The conclusion I landed on was that sex is worth addressing and that we as priests in God’s church have the biblical backing to encourage couples to wait to have sex, or stop having sex, until they are married.  What follows is a nugget of what I discovered in my biblical studies on the subject. My focus was on portions of two texts, Genesis 2 and 1 Corinthians 6.

In the narrative of Genesis 1-2, we read that Adam and Eve were created in the image of God, God found Adam’s aloneness to be not good, Eve was created out of the flesh of Adam to solve Adam’s aloneness, and that Eve was Adam’s gift from God, his helper suitable. The author of Genesis stepped away from the narrative and divinely provided a universal ideal on marriage in Genesis 2:24. We read, “For this reason a man will leave his father and mother and be united to (cleave to) his wife, and they will become one flesh.”  In a single verse, God has given us a beautiful and proper formula for the ordering of the male and female relationship, three steps leading into coming together as husband and wife. Genesis 2:24 has implications for contemporary issues in our modern culture such when a new family begins (leaving), when a home life, cohabitation, is to be established (cleaving), and when intimate relations between a man and a woman are proper (one flesh).

Within the steps of “leave, cleave, and one flesh” God has, I believe, revealed to us His best as it relates to family, home and sex. And God’s best is that the establishment of a new family, a home for that family, and sexual intimacy by the couple who start that new family all are intended to happen after the couple comes together in marriage. In Gen 2:24, God provides for us the foundation for his plan and purpose for intimate relationships between men and women and key insights into his plan and purpose for marriage.

It’s important to note that Genesis 2:24 was written before the Fall of Man and it is, thus, the ideal given by God before sin enters the human story soon after in Genesis 3.  Paul wrote 1 Corinthians to the early church, a people under the curse of sin but also a people with the cross and the redemption of Jesus at their disposal.

In 1 Corinthians 6:13b and 14, Paul wrote, “The body is not meant for sexual immorality (porneia), but for the Lord, and the Lord for the body. By his power God raised the Lord from the dead, and he will raise us also. The primary issue Paul was addressing within the church in Corinth was having sex with a prostitute. We view prostitution differently than the Corinthians would have. Commenting on this text Richard Hays wrote, “…the Corinthian men who frequented prostitutes were not asserting some unheard-of new freedom; they were merely insisting on their right to continue participating in a pleasurable activity that was entirely normal within their own culture.”  Paul was addressing an issue, sex with a prostitute, that was, in the Corinthian culture, widely acceptable, common and widespread. Perhaps some parallel issues in our time could be pre-marital or extra-marital sex or pornography, which are widely acceptable, common and widespread in our modern culture.

Paul continued with a description of the purpose of our human bodies. As his followers, Jesus lays claim to our physical bodies for his purposes. Regardless of the trends in the culture in which one lives, Christian believers have a calling to live into a different standard. This calling is true of the whole of us, which includes our physical bodies. Paul makes it very clear that the bodies of believers in Christ are destined for resurrection, because of Jesus’ resurrection. Thus, our physical bodies have a real connection to our Lord through his resurrection, even in the present time in which we live.

Paul continues in verses 18-20.  “Flee from sexual immorality (porneia). All other sins a man commits are outside his body, but he who sins sexually sins against his own body. Do you not know that your body is a temple of the Holy Spirit, who is in you, whom you have received from God? You are not your own; you were bought at a price. Therefore honor God with your body.”

Why flee porneia? Paul builds on his argument with the image of ownership of our bodies. The issue is who exactly has ownership of and the right to control the body of a believer? The believer’s body, it turns out, is a “temple of the Holy Spirit” who dwells within the believer through baptism. The believer’s body was, “bought at a price” by the redeeming blood of Jesus Christ on the cross.

Therefore, the proper response for the Corinthian believer, and all of us by implication, is to “honor God with our bodies.” This speaks clearly, I believe, to individuals who claim to be Christian and struggle to live in our present day, individualistic culture. Far from being accountable only to ourselves, Paul reminds the reader that we are accountable to the community of believers and to the Lord himself. This has universal implications, for the Corinthian Christians and for us in modern times. Despite what our culture(s) might tell us about the contemporary issues of our time(s) such as prostitution, pornography, and expressing our sexuality, we are to, as Paul writes, “Flee from porneia”, which is any sex outside of the marriage relationship. Times change, sin reigns, but God’s best for us remains the same.

The conclusion, after a study of Genesis 2 and 1 Corinthians 6, is that sex is worth addressing with pre-married couples. In fact, it can and should be central to our pastoral counsel with them. We, as priests in God’s church, have the biblical backing to encourage couples to wait to have sex, or stop having sex, until they are married. It can be our wedding gift to them!

About the Author: The Rev. Bill  Henry is an Associate Pastor at St. Stephen's Anglican Church in Sewickley, PA and apparently has devoted his D.Min studies to the topic of addressing pre-marital sex in pastoral ministry.