Anglican Diocese of Pittsburgh
One church of missionary grace and miraculous expectation.

On New Year's Resolutions: Speak, Lord, for Your Servant Hears 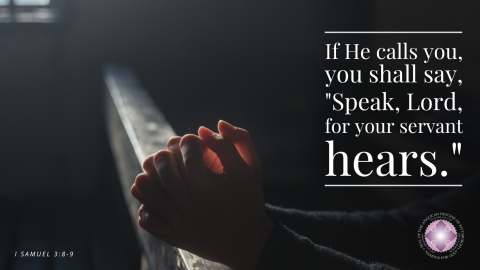 And the Lord called Samuel again the third time. And he arose and went to Eli and said, “Here I am, for you called me.” Then Eli perceived that the Lord was calling the boy. Therefore Eli said to Samuel, “Go, lie down, and if he calls you, you shall say, ‘Speak, Lord, for your servant hears.’” So Samuel went and lay down in his place.

As I look ahead into the new year, this text from I Samuel has been much on my mind. I’ve never been fond of New Year’s resolutions, but the turning of the year is, for many, a moment of reassessment—an opportunity to consider what we might like to do differently as another year begins. That is not a bad thing. It is the closest thing to an examen that our culture does.

I think that this account of Samuel in the temple—and particularly of Eli’s counsel to him—suggests to us something we might want to do differently, or at least to grow further in, this year. Once Eli figures out that it was the Lord calling Samuel, he gives some excellent counsel—which we might also take as we begin this year. “You shall say, ‘Speak, Lord, for your servant hears.’”

There is an exhortation to openness to the Lord in this counsel. So often my prayers run along the lines of “Lord, would you please do this?” or “Jesus, what do you want me to do about that?” or “God, what is the right decision here?”

But the listening that Eli counsels Samuel to is entirely open. “Speak, your servant hears.” There is not a problem to be solved or a need to be fulfilled, simply, “Lord, what do you want to say? Because I want to hear.” It strikes me that this attitude of prayer is what informs all other action or resolution. What would 2023 look like if our New Year’s resolution was to approach prayer with this openness?

I do not know what the Lord wants to say to you, or to me for that matter. He might want to provide us with a word of encouragement, or of exhortation to some purpose or goal, or of correction leading us to repentance. Eli instructs Samuel toward a radical openness to the Lord in prayer. Whatever He wants to say, it is worth hearing.

As individual Christians, as lay or ordained leaders in our congregations, as congregations, and as a diocese as a whole, I hope that we—like Samuel—might say, “Speak, Lord, for your servant hears.”