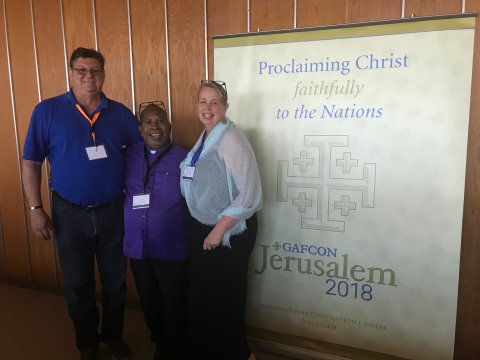 GAFCON: Conference, Family Reunion, or Taste of Heaven? When I returned home from attending GAFCON, my sister asked me if I had to “pinch [my] self” while I was in Jerusalem. I responded, “Are you kidding me? I am still pinching myself!”

I’d never even dared to dream my husband and I would have such an opportunity. And the experience exceeded my expectations. I’ve yet to wrap my head around all that took place during that one week in June, but I do know that a gathering of 1,950 Anglicans from 50 nations will always be more than just a conference!

You’ve possibly read Bishop Jim’s updates on GAFCON. I want to add another word of encouragement: our future is bright! Those in the Progressive camp think that we who are Orthodox do not understand our culture and refuse to do so. The teaching at the conference proved otherwise. Keynote presentations and workshops on a range of contemporary issues empowered us to more deeply understand sinful behaviors that are now widely accepted, but also challenged us to be, as one speaker said, “clear but gentle” as we encourage repentance from those actions which could have devastating repercussions. I lost count of the number of times that together we declared, “We will proclaim Christ faithfully to the nations!”

Something unusual happened to me at GAFCON. I’m an introvert who tends to find a corner in which to hide during large gatherings...including reunions with extended family I don’t see frequently. But at GAFCON, I actually found myself looking forward to “tea breaks!” (Coffee was served, as well--but that is another story!) Everywhere you looked, people were in conversation. I wish I’d have taken a 360-degree photo, because I am certain it would have captured our Anglican family meeting new friends, chatting with each other, hugs between former colleagues, arms extended in a warm greeting, and attendees praying for one another.

GAFCON really was like a family reunion! My heart was warmed each time I reconnected with the many ACNA familyfriends I’ve known for years, yet are spread across the Province. And now I know Anglican family members from around the globe. I grin when I think of sharing a taxi and having dinner with Marcos from Mexico, giving my scarf to Papua, New Guinea’s, Bishop Ihove to wipe his tears as he told my husband and me of his love for his congregations, laughing with Simone from Australia when we shared stories of our kids in LEGO competitions, and knowing that John promised to pray for me, even as he returned to his ministry in New Zealand.

I introduced myself to people so frequently, now it’s become a habit! I laughed to myself when I said, “Hi, I’m Jenni” to someone walking by my house the other day, instead of simply a polite, “Hello,” or worse, pretending to have my nose in a book!

GAFCON was also a taste of Heaven for me. My eyes were overwhelmed by the beauty of the different skin tones that surrounded us each day. Seeing smiles on the faces of people I didn’t know made me feel welcome. The glorious colors and stunning wardrobes of the African women lifted spirits. The praises of the Nigerian choir both soothed our souls and got us dancing!

One of the most moving experiences for me was praying the Lord’s Prayer together each day...each of us in our own tongues. What could have been a cacophony of languages sounded like perfect harmony to me. It was heavenly.

Excuse me while I go pinch myself. Again. 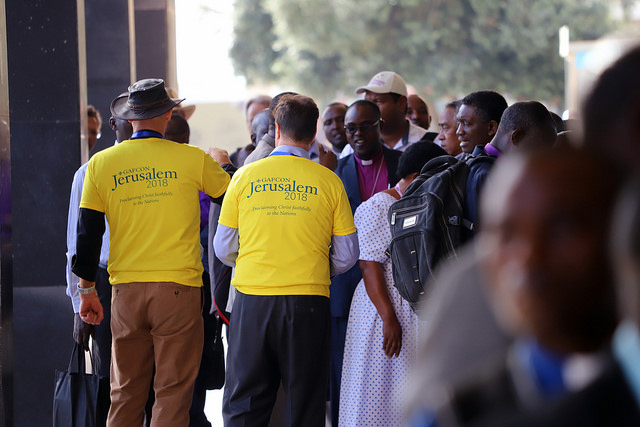 As I arrived in the Tel Aviv international airport, I was happy to be greeted by a smiling Australian woman wearing a bright yellow GAFCON shirt! These yellowshirted volunteers, whom I later affectionately referred to as “the canaries,” were a wonderful help to all the bishops and delegates as we navigated the conference center and Jerusalem!

Previously, I hadn’t given much thought to the presence of the Anglican Church in Australia. When I confessed this to an Australian pastor in my designated prayer group, he said, “Don’t you know your Australian history?!” We smiled, and marveled at the diversity represented by our prayer group: two Nigerians, two Ugandans, two Americans, and two Australians… and this was just our prayer group! The conference was a massive convergence of different languages, cultures, and colors. We’d all come to one place to participate in “the GAFCON movement.” We studied scripture, we prayed, we worshiped, we heard testimonies from those who had been persecuted for standing firm in the Christian faith, and we “identified” as those who stayed within Anglican Communion. Though many in the world don’t see it this way, we are convinced that we have stayed true, while others have left the Orthodox Anglican Communion. Together, we drafted a statement that defined our relationship with the Lambeth conference and with the Archbishop of Canterbury. We asked Canterbury to repent, enforce discipline where it is needed, and stand firm with us in the orthodox Christian faith.

There was an overwhelming sense of unity: unity in Christ, unity in vision, and unity in mission. We had gathered together with a shared mission to “proclaim Christ faithfully to the nations.” This was reinforced by our presence together in Jerusalem! Jerusalem is the location where much of the life and work of Christ took place. Jews and Muslims, however, also gather in Jerusalem because it is a holy place for them as well.

Over the centuries, Jews and Muslims have fought over possession of the temple mount… the most holy place for their respective religions. I was awestruck to see the devotion of the Jews as they prayed at the exterior Western Wall of the temple mount (also known as the “Wailing Wall”), which is their only current access point to the temple. As I laid my hands on the rocks of the wall and prayed, I sensed that this was a holy place --- but it was not holy because of the temple mount itself. I understood that the mount no longer houses the presence of God in a particular way as it had in the past. I sensed instead that it was a holy place because so many people come there seeking God, seeking a Messiah, and wanting to be close to him. I did not sense in them the hope, peace, joy, and task ahead of me that I was feeling so strongly as I prayed there. Sadly, Jews and Muslims have placed too much of their hope in this pile of old rocks, whereas Christians have placed their hope in the risen Christ! We don’t pray toward dead stones, but rather we pray among living stones, which is the body of Christ, indwelled by the Holy Spirit.

Later in the week, the entire GAFCON group of over 2,000 people gathered on the temple steps for a picture (see page 2). Excavations have exposed the original temple steps, the location where we believe Peter preached on the day of Pentecost in Acts chapter 2. This is the location where 3,000 “believed and were baptized.” Like our GAFCON representatives, these 3,000 believers were of different tribes, tongues, and nations. Like our Anglican brothers and sisters of GAFCON, these new believers also did not remain in Jerusalem. The gospel is a missionary message! Those who have received the good news in faith are sent by God to proclaim this good news. Our hope is found in the risen Christ, not in our buildings, not in our traditions, not in our budgets, not in our own goodness. If you agree that our hope is found in the risen Christ, then join this GAFCON movement, stand firm, and go to “proclaim Christ faithfully to the nations!”