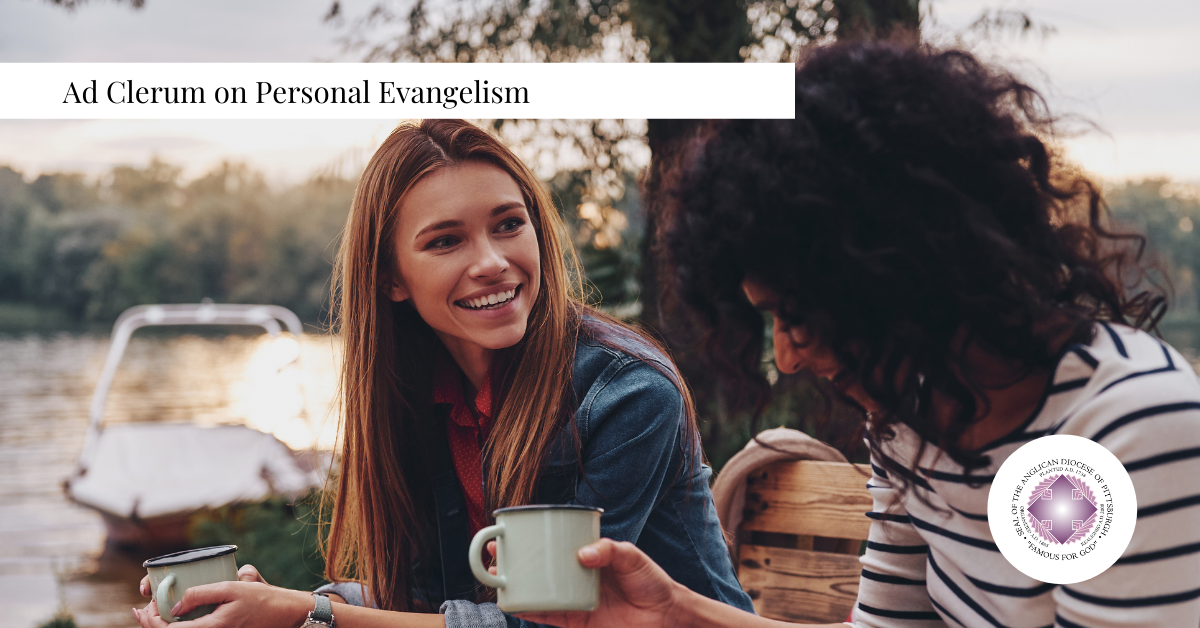 Personal evangelism is not something that comes easily for me. While I know that it is a great privilege, an essential task for the church, and that there is great rejoicing in heaven when one sinner repents, I am still something of a reluctant evangelist. I blame it on my “stiff upper lip” British background and my antipathy towards the slick language of so many televangelists. I am, however, married to one of the world’s most effective evangelists! Angela is able to move from an opening greeting with a perfect stranger to an in-depth conversation about personal faith in no time, and many of these interactions conclude with prayer. Through her example and encouragement, I have begun to make some headway.

Before all of the travel restrictions of the pandemic, I was flying home to Destin from Atlanta one day. The plane was a regional jet designed for people who are definitely not my size! There were two seats on either side of the aisle, and my seat mate was already in place when I arrived at my assigned row. From his appearance, with short hair, and tall and trim, I guessed he was in the military. I smiled and nodded a greeting and then took my place. I was wearing a basic black clergy shirt and collar. As I sat down, he looked at me and said, “What do you do for a job?”

I was mildly surprised that my uniform did not reveal my occupation, and not wanting to get into too many ecclesiastical details, I replied, “I’m a pastor. What about you?”

“I’m in the Army and I am an atheist!” he said rather grimly. This was going to be an interesting journey!

“Tell me about the god that you don’t believe in,” I responded with a smile. He seemed a little taken aback by my question but then launched into a passionate description of an angry capricious god, filled with intolerance and indifference. After he had finished his diatribe, I said, quietly, “I don’t believe in that God either.”

He paused and then added, “Well I don’t believe in the Bible.”

As it happened, I had taken my Bible out of my backpack, ready to read during the flight. Pointing to it, I asked, “Which part don’t you believe?”

Clearly not happy with the way that the conversation was progressing, he snapped back, “Well I don’t believe that it is old!”

“That’s interesting.” I responded. “A few years ago I visited a museum in Jerusalem where I saw fragments of early copies of the Bible that have been carbon dated as more than 2000 years old.”

“You believe in carbon dating? I thought you said that you were a Christian.”

I was surprised at that response and was glad to tell more. “I am a Christian, but before I became a pastor I was trained as a scientist and have a degree in mathematics, so I have no problem with carbon dating.”

This conversation was likely becoming increasingly uncomfortable for him, and he probably wanted to change direction. Pointing at a second book on my tray table he asked, “What else are you reading?” It was a book by John Burke titled No Perfect People Allowed: Creating a Come-as-You-Are Culture in the Church. My son Jon, an ordained Anglican priest in Raleigh, NC, had recommended it for its emphasis on creating a church culture for people who have little or no faith and have no experience of being part of a church. I told my seatmate that it was a gift from my son and written for people just like him – people who are asking the right questions but have never been given any good answers.

He looked intrigued, so I said, “I’ll give it to you if you promise to read it!”

He smiled and said, “Agreed – just as long as you promise to read my book!” He then gave me a book with the title CHAOS – Making a New Science, by James Gleick.

Honor satisfied, the conversation was over and it wasn’t long before we arrived in Destin/Fort Walton Beach. We parted with smiles, and while I had not seen a complete conversion from Chaos to New Life, I felt sure that my new friend had been given a lot to think about. I continue to pray that God will give him other companions on the way.

Cliff Knechtle (an author and evangelist who pastors a church in New Canaan, CT) puts it this way: “A person’s coming to Christ is like a chain with many links. There is the first link, the middle links and a last link. There are many influences and conversations that precede a person’s decision to convert to Christ. I know the joy of being the first link at times, a middle link usually and occasionally the last link. God has not called me to only be the last link. He has called me to be faithful and to love all people.”

I had a number of “last link” experiences during our time in New York City. One of the most memorable was when I met with Dr. A – Director of an HIV/AIDS Clinic on the Upper East Side of Manhattan. He had asked for an appointment to discuss an urgent personal matter.

He introduced himself by telling me that while he had been raised in a nominally Roman Catholic family, he had rejected the church and Christian faith while in medical school. More recently he had fallen in love with a young woman doctor who was an enthusiastic Christian, and she had declared that their relationship was going nowhere until he became a Christian. Totally smitten, he had come to seek my direction on how to become a Christian to satisfy her requirements. I could tell that his search was heartfelt – and so offered to meet with him for a weekly personal Bible study using the Gospel of Luke. He agreed but pointed out that, in all honesty, he believed in neither God nor the Bible.

Our study proved to be a delightful adventure. I began each of our early morning sessions with prayer. At first, he asked about the origins of the Biblical text and its historicity and accuracy, but over the weeks I watched as he was drawn into the stories. And then one week he said, “I’ve studied lots of ancient medical writings, and the author of this book was most definitely a doctor.” I pointed out that most Bible scholars would agree with him. One morning, weeks into our studies, he announced that he had prayed to Jesus for the first time in his life and that he had experienced a peace that he had never known. His faith grew steadily. Sadly, he never “got the girl,” and they both moved on … but he had discovered a far greater love, a new life in Christ.

As for you, always be sober-minded, endure suffering, do the work of an evangelist, fulfill your ministry. (2 Timothy 4:5)